The Yale University Ph. D. Program in Islamic Studies is devoted to comprehensive research on the religion of Islam and to training superior students for academic careers in that field. Students accepted into the program are offered full scholarships along with a multi-year stipend. Islamic Studies is one of ten fields in the Department of Religious Studies, where students and professors researching different religious traditions interact. In addition to Prof. Gerhard Bowering and Assoc. Prof. Frank Griffel, students also have the benefit of professors in the Near Eastern Studies, History, and Political Science Departments.

Students in Islamic Studies are expected to develop both a comprehensive knowledge of Islamic intellectual history and religious thought, as well as mastery of a field of specialization and the requisite tools for critical scholarship on Islam. They are expected to demonstrate competence in Islamic religious history (focusing on the development of Islamic civilization, law, society and institutions in the period from the origins of Islam to 1500 CE); Islamic religious thought (focusing on Islamic philosophy, theology, Sufism and Shi’ism); Islamic scripture and tradition (focusing on the composition, redaction and interpretation of Qur’an and Hadith); and modern and contemporary Islam (focusing on 16th to 21st century developments in the Arab Middle East, the Turco-Iranian world, South Asia, Southeast Asia, Africa and, most recently, Europe and America). Frank Griffel is responsible for modern and contemporary Islam, Gerhard Bowering for Islamic religious history; and thought as well as Qur’an and Hadith. Arabic language and literature, as well as Persian and Turkish, are taught in the Department of Near Eastern Languages and Civilizations. Modern Iranian history and Islamic political thought are taught respectively in the Department of History and Political Science. 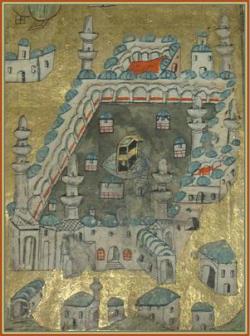 Decorative sketch of the Ka’ba from a Beinecke manuscript