Religion in American History: A Reader 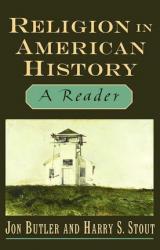 At the end of the twentieth century, religion seems to be ubiquitous in America. Its existence and influence are especially apparent in our politics, but its presence is most deeply felt in our personal lives and experience. Was it always this way?

Offering a rich selection of classic and recent scholarship, Religion in American History: A Reader presents an extraordinary portrait of religion’s fate across four centuries of the American experience. Its essays cover major issues in American history and religion, detailing religion’s purpose in American life and examining many topics that are either ignored or minimized in similar books. It addresses the decline and revival of American Indian religion; women’s powerful roles in American religion; immigration, assimilation, and separation and how they have contributed to the American religious experience; political activism; and religious bigotry. It also discusses Catholics, Protestants and fundamentalism, Mormons, and Jews. Selected debates encourage readers to test conflicting interpretations about religion’s impact on American history, and original documents trace religion’s influence on slavery, race, and politics from the colonial era to the late twentieth century.

Divided into three sections - colonial era, nineteenth century, and twentieth century - and featuring essays by prominent American historians, this volume serves as an excellent text for courses in American Religion, the History of Religion, and Religion and Culture. It is enhanced by helpful introductions to each essay and ample suggestions for further reading. Uniquely comprehensive, Religion in American History: A Reader serves as a one-volume tour through America’s tumultuous, varied, and often misunderstood religious past.