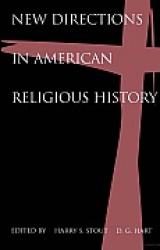 The eighteen essays collected in this book originate from a conference of the same title, held at the Wingspread Conference Center in October of 1993. Leading scholars were invited to reflect on their specialties in American religious history in ways that summarized both where the field is and where it ought to move in the decades to come.

Taken together, these essays reveal a rapidly expanding field of study that is breaking out of its traditional confines and spilling into all of American history. The book takes the measure of the changes of the last quarter-century and charts numerous challenges to future work.