The Nation without Art: Examining Modern Discourses on Jewish Art 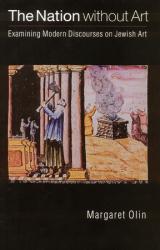 Looking through the history of art, a reader might conclude that Jews could not create art—and such an assumption, historically incorrect, would be no accident. As we see with disturbing clarity in this book, the discipline of art history—even the first scholarly studies of Jewish works of art—encourages the idea of the nonartistic Jew. Covering the last two centuries, The Nation without Art illuminates the rise of the paradigm of the non-artistic Jew and expresses the ways in which theorists, critics, and artists have sought to subvert, overcome, or work within it.

Case studies explore the Bezalel School of Arts and Crafts in Jerusalem, whose efforts to use art to create a Jewish nationality in Palestine raise important issues of national identity, and the discovery in 1932 of the third-century Synagogue of Dura Europos, a symbol for scholars struggling against the Third Reich. Among those who supported or challenged concepts of Jewish art, Margaret Olin considers the nineteenth-century rabbinical scholar David Kaufmann, the philosopher Martin Buber, the critic Clement Greenberg, and the filmmaker Chantal Akerman. Olin’s work broadens our understanding of the relation of Jews to the visual image, critiques the nationalist, ethnocentric paradigms of current disciplines, and offers insight into the tenacious art historical discourses that thinkers must inhabit uncomfortably or escape with considerable difficulty.