The Jewish Life Cycle: Rites of Passage from Biblical to Modern Times 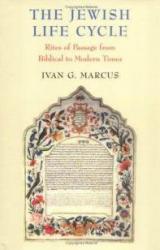 In this original and sweeping review of Jewish culture and history, Ivan G. Marcus examines how and why various rites and customs celebrating stages in the life cycle have evolved through the ages and persisted to this day. For each phase of life - from childhood, adolescence, adulthood, to the advanced years - the book traces the origin and development of specific rites associated with the events of birth, circumcision, and schooling; bar and bat mitzvah and confirmation; engagement, betrothal, and marriage; and aging, dying, and remembering. Customs in Jewish tradition such as the presence of godparents at a circumcision, the use of a four-poled canopy at a wedding, and the placing of small stones on tombstones are discussed. In each chapter, detailed descriptions walk the reader through events such as early modern and contemporary circumcision, wedding, and funeral ceremonies. In a comparative framework, Marcus illustrates how Jewish culture has negotiated with the majority cultures of the ancient Near East, Greco-Roman antiquity, medieval European Christianity and Mediterranean Islam and with modern secular and religious movements and social trends to renew itself through ritual innovation. In his extensive research on the Jewish life cycle, Marcus draws on documents on various customs and ritual practices, offering reassessments of original sources and scholarly literature. Marcus's survey is the first comprehensive study of the rites of the Jewish life cycle since Hayyim Schauss's "The Lifetime of the Jew" was published in 1950, written for Jewish readers. Marcus's book addresses a broader audience and is designed to appeal to scholars and interested readers.