Forms of Representation in Alois Riegl’s Theory of Art 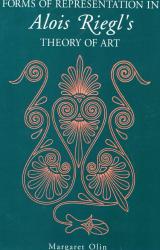 Alois Riegl (1858–1905) made pioneering contributions to the history of late Roman, seventeenth-century Dutch, and Baroque art. His impact on scholars, however, extended beyond art-historical circles into the fields of art theory, psychology, sociology, literary criticism, and philosophy. Margaret Olin utilizes extensive archival material and the entire range of Riegl’s published writings to locate his theory of representation in the Viennese and wider European intellectual context of the late nineteenth century.

Riegl is usually viewed as a precursor of mid-twentieth-century formal criticism. Yet his formal theory had a representational edge. He shared with many positivists the sanguine expectation that the emulation of scientific methodology could provide solutions to humanistic and social concerns. Accordingly, he modeled his view both of his own field, art history, and of artistic practice on the observational sciences. In representational art, he adhered to naturalism. With his studies of the lotus ornament in Stilfragen, however, he broached the issues of formal theory that gave his work lasting significance. Olin interprets these studies in the light of a theory of “structural symbolism” associated with the Arts and Crafts Movement, showing how they articulate in great detail a theory of the capacity for representation in ostensibly nonrepresentational ornament. Riegl envisioned the designer as an ornamental scientist, who studies the structure of surfaces in almost scientific detail to develop increasingly complex means of symbolizing its solidity and unity, just as the fine artist studies nature to depict it ever more accurately.

Olin’s account of Riegl illuminates the hidden representational agenda of early formal theory crucial to the dramatic call for nonobjective art, which Riegl’s theories helped inspire. In so doing, it also reveals Riegl’s significance for the present, postformalist phase of art-history writing.