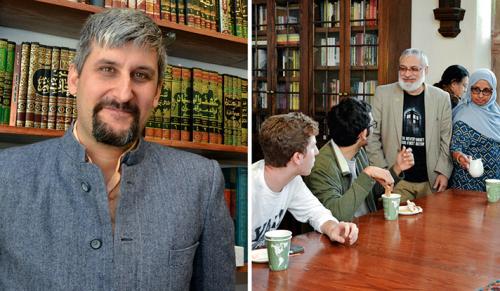 “Welcome. We will begin each week promptly at 4:34,” Shawkat Toorawa told the assembled group of students at the Whitney Humanities Center on a recent Wednesday. “I will talk about three items of cultural interest.”

This is how Toorawa, the newly appointed professor of Arabic literature at Yale, begins sessions of his “Dr. T Project,” a drop-in presentation of “30 minutes of tea, shortbread, and three things worth knowing.” That day’s discussion explored world heritage sites, intangible culture heritage, and the opera singer Dame Kiri Te Kanawa — things that the students may not have been previously familiar with, but that “Dr. T,” as his students call him, thinks they might wish to know about.

The impetus for the weekly event began in the classroom seven years ago at Cornell University when Toorawa realized that his allusions to literary, culture, and music were falling flat with the students in one of his classes.

“Either they wouldn’t have seen a movie I mentioned, or hadn’t read a text I referenced,” says Toorawa. “Rather than lament the state of education I thought I should contribute to fixing it. So one day I teased my students in the class that I should teach a course called ‘everything Professor Toorawa thinks you should know but you don’t.’” That summer, students began contacting Toorawa to ask for the name of the class that he had mentioned because they were interested in taking it. Those requests lead Toorawa to create the “Dr. T Project.” The project has also evolved into a blog.

“I’ll discuss anything that has some cultural impact,” says Toorawa. “I want to explode the difference between high culture and low culture. Doing this is an essential part of my pedagogy as well. I don’t just teach scheduled classes; I am also a strong believer in a good liberal arts education; and the Dr T Project is one of the ways that I can manifest this in a pure form, as it were.” The students who attend do not receive credit for coming to the event, and there is no sign-up sheet. “You come because you want to come, and I do it because I want to do it. It is for the pure love of knowledge,” says Toorawa.

Toorawa is one of almost 50 new professors appointed to positions in the Faculty of Arts and Sciences in 2016-2017. He is joined by Travis Zadeh, assistant professor of religious studies, as part of an effort to strengthen both Arabic and Islamic studies at Yale, according to Frank Griffel, professor of religious studies, assistant director of graduate studies, and chair of the Council on Middle East Studies at the MacMillan Center.

The Graduate Program in Islamic Studies at Yale has seen a steady increase in enrollment in recent years and provides students with “a thorough education in classical and pre-modern Islam as well as contemporary Islam,” says Griffel. “Yale strikes a great balance by having faculty who are trained in classical Islam but also in contemporary Islam. This sets Yale apart from other programs.”

For Zadeh, what he is most looking forward to in his new position at Yale is the possibility of building bridges between different fields and disciplines. “There are many subfields within the study of religion, and it is an exciting time to think critically about the interconnections and points of connectivity that we individually can bring to bear on these fields and put them in conversation with each other.”

“Yale is such a vibrant community,” he continues, “and the bibliographic resources here of are truly unparalleled. Having access to not only the intellectual capital of people, but the physical capital of books and manuscripts is really exciting for me.”

This year Yale is celebrating 175 years of Arabic studies, and Toorawa says that the long history of the program influenced his decision to come to Yale. “Yale has a special status in the field. It is in the interest of the entire country that the Yale department thrive because it is the oldest in the United States and has produced some major scholars. Part of my decision to come here was this opportunity to be in this special place.”

Zadeh says that the two new Yale professors “complement each other,” and that “part of the allure of coming to Yale was “the dynamism of the Department of Religious Studies, the trajectory that it is on, and the opportunity to open up conversations in Islamic Studies across various disciplines.”

The Yale scholars plan to host a meeting of the School of Abbasid Studies, of which Toorawa is a director, in 2018. The School of Abbasid Studies is a loose affiliation of people who study the Abbasid period of 750 to 1258, which is considered to be a formative period for Islamic civilization and culture. The group will meet for the first time in America in 2018 at Yale.