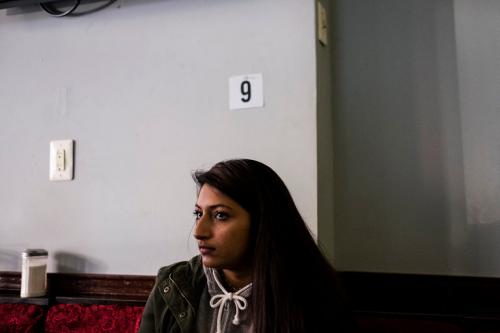 Muslim Americans, already alarmed by the election of Donald J. Trump, said Friday that Mr. Trump’s choices for crucial posts heightened their fears of discrimination, violence, deportation and even detention.

Many said they worried that a more hostile America could prompt more Muslims to join forces with terrorists.

During the presidential campaign, Mr. Trump said “Islam hates us,” endorsed the idea of a government registry of Muslims and proposed suspending immigration by Muslims or people from some Muslim-majority countries. In interviews on Friday, many Muslims said that they were not sure before the election how seriously to take such talk, hoping that it was more political hyperbole than policy, but that the personnel moves of the last few days had confirmed their worst fears.

At the Dream Cafe, a hookah bar in the Astoria neighborhood of Queens, Sara Khan, 17, whose parents are from Pakistan, expressed particular concern about her family’s ability to remain in the United States. “What are we going to do if he tries to kick us out?” she asked of Mr. Trump.

“People from all over the world come here to find freedom,” she said, but now she wonders what that freedom means if “one man can take it away.”

Mr. Trump has offered the post of national security adviser to Michael T. Flynn, a retired Army general who has written that “fear of Muslims is rational,” has said that “Islam is a political ideology” and is “like a malignant cancer.” For director of central intelligence, Mr. Trump has tapped Representative Mike Pompeo of Kansas, who has said that “most Islamic leaders across America” were complicit in terrorist attacks for not speaking out more forcefully.

He has asked Senator Jeff Sessions of Alabama, who has endorsed a Muslim immigration ban, to be attorney general, and has named Stephen K. Bannon, whom critics have denounced as a white nationalist, as senior White House strategist. And some Trump supporters have cited the internment of Japanese-Americans during World War II as a possible precedent.

“I did not take Trump’s statements seriously enough, and I did not take these white nationalists as seriously as I should have,” said Zareena Grewal, an associate professor of American studies and religious studies at Yale. “That these people have moved from the fringe of American politics to the very center should frighten everybody.”

Hanan Hassan, a native of Iraq who works at a refugee center in Phoenix, mostly with people from Syria, said her mood and that of her clients had changed drastically.

“Some of us are scared of being sent back,” she said. “Our children are having issues at school.”

Ms. Hassan, 37, who said her parents and her brother were killed by a car bomb in Baghdad, said, “We left home because it was not safe there,” but now the United States feels unsafe.

Some voiced worries about a Muslim registry, and the prospect of being tracked and investigated by the government, noting that a registry for noncitizens from some Arab countries, in effect from 2002 to 2011, resulted in few leads on terrorism, but many deportations. Others shrugged off the prospect, saying that they assumed they were under surveillance already.

And people were still unsure how seriously to take the even more troubling idea — not raised by anyone with a formal role on the Trump team — of internment.

“I don’t put it past them,” said Nihad Awad, executive director of the Council of American Islamic Relations. “Personnel is policy, and Flynn considers us as the enemy, so what kind of policies is he going to push forward? The Muslim community will be at his mercy.”

Linda Sarsour, executive director of the Arab American Association of New York, said: “I believe in my heart that our fellow Americans would not let that happen. I’m not saying that it definitely won’t happen. The fact that we’re even having this conversation is really spreading a lot of fear in the community.”

Muslim leaders said their strategy would be to mount legal challenges and to strengthen alliances with other religious and ethnic groups.

Muslim, Jewish and Christian clergy members and lay leaders gathered in front of mosque in Washington on Friday in a demonstration of mutual support. Mobilized by an interfaith group called “Shoulder to Shoulder,” they asked President-elect Trump to keep his election-night promise that he will serve as the president of all Americans.

“American Muslims follow the U.S. Constitution,” said Rizwan Jaka, chairman of the board of the ADAMS Center, one of the nation’s largest mosques, in Northern Virginia. “We call upon this incoming administration to also follow it.”

They refrained from criticizing Mr. Trump or his selections, and instead called on them to recognize that American Muslims serve the United States as doctors, teachers and law enforcement officers. They said that, contrary to claims by Mr. Pompeo and others, American Muslims routinely denounce terrorist attacks perpetrated by Islamic extremists, and have been credited by the Department of Homeland Security with preventing attacks by reporting suspects to the authorities.

Usama Shami, president of the Islamic Community Center in Phoenix, said he had received an outpouring of support from non-Muslims, including some who came in person to join in Friday Prayers, and others who offered to register as Muslims if a registry is created.

“All of that gives us comfort,” Mr. Shami said. “The problem is, in this day and age — this is 2016, almost 2017 — we’re going backward. Make America great again? How? Having an internment camp for Muslims as they had for Japanese? Appointing Islamophobes for key positions?”

Still, some Muslims held out hope that the Trump team may be more bluster than real threat.

“He is a businessman, and businessmen have plenty of masks they wear everyday,” said Heshem Hassane, 42, an Egyptian immigrant who owns an ironworks in New York. He expressed doubt about whether the new administration would follow through on some plans, but added, “there’s no person who’s not concerned unless he’s isolated about what’s going on.”

For many Muslims, their fears are less about Trump administration policies than about a hostile atmosphere that they say could promote violence against them. The FBI reported this week that anti-Muslim hate crimes rose 67 percent in 2015, and Muslim groups say 2016 is on track to be worse.

“Every day people are calling from all over the country to tell me about incidents and attacks, and I have to tell people, I’m not a Trump emergency responder,” Dr. Grewal said. “People are worried about their actual, physical safety, about attacks. People are asking, ‘Do we buy a gun? Do we get a dog?’ ”

For many Muslims, the worst prospect of all is that members of their community, alienated by the political atmosphere and government action, could heed calls by Islamic extremists to carry out terrorist attacks.

“ISIS will have more disenfranchised people, people pushed to the margins, to appeal to,” Mr. Awad said. “This is music to their ears.”

By RICHARD PÉREZ-PEÑA and LAURIE GOODSTEIN
Sharon Otterman and Fernanda Santos contributed reporting.
A version of this article appears in print on November 19, 2016, on page A17 of the New York edition with the headline: Muslim Americans Speak of Escalating Worry.