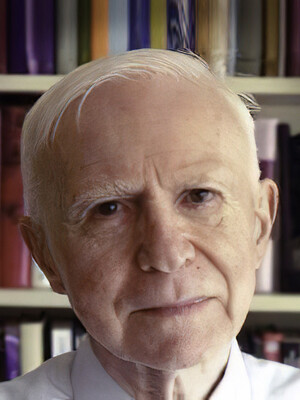 Louis Dupré, T. Lawrason Riggs Professor Emeritus of Religious Studies, Catholic phenomenologist and religious philosopher, heralded in Commonweal as “one of the most significant religious philosophers of the twentieth century,” died on Jan. 11 at his home in Kortrijk, Belgium. He was 96.

Dupré’s scholarly range was extensive and his publications impressively broad. In 15 books, four editions, and more than 200 articles he wrote on subjects as diverse as Marxist philosophy (his dissertation and two further books), Hegel, Kierkegaard, Augustinianism, European romanticism, the Enlightenment, spirituality, and mysticism. Early on he wrote a comprehensive philosophy of religion, and towards the end of his career an acclaimed trilogy of works dealing with the modern world of reason, exploring what one critic called “the transcendent dimension in our secular world.”

Louis Dupré was born in Veerle, Belgium, the son of a school teacher. He often remarked on the importance of the small, rural nature of this village, near the abbey of Averbode, where the natural landscape nurtured his interest in religious issues and offered him the silence and peace for contemplation that he continued to value throughout his life. He received his Ph.D. at the Université Catholique de Louvain and, following post graduate study in Denmark, emigrated to the United States in 1958. That year he started teaching philosophy at Georgetown and in 1973 he was appointed to the Department of Religious Studies at Yale.

Over the course of his career, Dupré’s publications range widely, but thematically they are all of a piece, demonstrating an unwavering focus on the nature of the spiritual life and of the search for religious truth. By “truth” he meant not literal truth, but something that lies beyond the rational — the truth found in poetry, in art, and in religion. In all of his books, even those most philosophic and recondite —“Augustinianism and Modern Theology” (1965), “The Other Dimension: A Search for the Meaning of Religious Attitudes” (1972), the first part of his trilogy, “Passage to Modernity: An Essay in the Hermeneutics of Nature and Culture” (1994), and “The Quest of the Absolute: Birth and Decline of European Romanticism” (2013), called by Henry Weinfield “the capstone to a great scholarly career” — this quest lies at the center.

It was partly the concentration on consequential subjects and big ideas that made Dupré, according to his students, a “mesmerizing” teacher, who could hold them captivated by his wide humanistic learning and his fervent lecture style.

He taught core courses in the humanities, such as “The Development of Modern Thought,” which looked closely at figures such as Hobbes, Locke, Spinoza, Leibniz, Kant, Pascal, Vico, Herder, and Marx. But students were particularly intrigued by his courses on big questions, such as “The Phenomenology of the Mystical Experience,” which considered alleged mystical experience over the ages, and “Phenomenology and Religion,” which explored common themes drawn from various religions such as “creation, alienation, salvation, especially the question of life after death.”

It was for such courses that in 1996 a group of admiring Phi Beta Kappa undergraduates chose to award Dupré the William Clyde DeVane Medal for distinguished teaching and scholarship, noting he “approaches teaching with the same fervor that has fired his own education and scholarship” and praising his “sensitivity to his students, his high standards, his approachability, and his dedication to teaching.”

When the Dalai Lama visited Yale in 1991, Dupré was one of the faculty with whom he met. A former dean tells the story of how, after the visit, when he encountered Dupré, Dupré simply said, remarking the undeniable spiritual qualities that were conveyed by his very presence, “Yes, that’s it.”

Among many other honors, Dupré received honorary degrees from Georgetown University, Marquette University, Loyola College (Baltimore), and Sacred Heart University. He retired in 1998 and in 2010 moved to be with his wife Edith Cardoen, a psychologist, in the small Flemish town of Kortrijk, where he could enjoy the peace and solitude he always said be valued and where he could continue reflecting on the nature of the spiritual life, which he believed gave experience meaning, significance, and consequence.