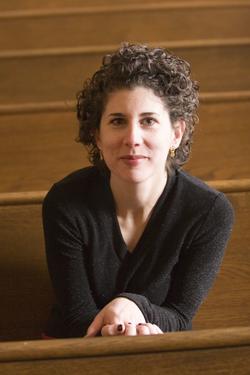 Publication Date:
February 22, 2019
We are happy to announce that Laura Nasrallah, world-renowned scholar of New Testament and early Christian literature, will be joining us at Yale in a joint position between the Department of Religious Studies and Yale Divinity School as of 1 July 2019 as Buckingham Professor of New Testament Criticism and Interpretation.  A brilliant and creative interdisciplinary scholar, a thoughtful, inclusive teacher, and a powerful institutional leader, Nasrallah joins our powerhouse community of scholars with premodern interests in the study of religion.  In her writing, teaching, and field leadership, she works to engage scholars across disciplines, chronologies, and geographies through conversation and collaboration. In her teaching and service, she has demonstrated a profound commitment to equity and inclusion as essential values for the social communities we create through our work.
Laura Nasrallah is a Princeton University graduate with an M.Div. and Th.D. from Harvard. She served on the faculty of Occidental College in Los Angeles before joining the Harvard faculty in 2003, earning promotion to associate professor in 2008 and full professor in 2011.

Nasrallah’s research focuses on bringing together New Testament and early Christian literature with the material remains of the Mediterranean world. Her major works include “An Ecstasy of Folly”: Prophecy and Authority in Early Christianity (Harvard, 2003), Christian Responses to Roman Art and Architecture: The Second-Century Church Amid the Spaces of Empire (Cambridge, 2010), and Archaeology and the Letters of Paul (Oxford, 2019). In addition, she has co-edited Prejudice and Christian Beginnings: Investigating Race, Gender, and Ethnicity in Early Christian Studies (Fortress, 2009) and From Roman to Early Christian Thessalonikē: Studies in Religion and Archaeology (Harvard, 2010). She is working on a commentary on 1 Corinthians for the Hermeneia series and the completion of a co-edited volume titled From Roman to Early Christian Cyprus. In addition, Professor Nasrallah has published 20 scholarly articles and book chapters, with several more at press or under review.