The Hidden Histories of Islamic Magic 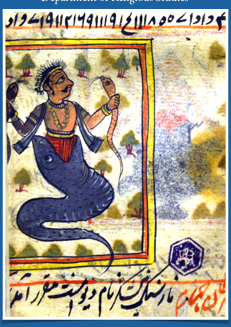 Mysteries of nature, modern enchantments, and the curse words of colorful incantations were among the many topics addressed in the two-day symposium “Magic and the Occult in Islam and Beyond,” held on March 2-3. Organized by Travis Zadeh (Yale University), the symposium brought together an international array of scholars with diverse areas of expertise. The papers and discussions that ensued addressed the place of the occult in Islamic thought and the modern challenges of thinking in scholarly terms with alternative and contested epistemologies. The event was funded by the Council on Middle East Studies at the MacMillan Center at Yale and the Edward J. and Dorothy Clarke Kempf Memorial Fund, and was sponsored by the Departments of Religious Studies and Near Eastern Languages and Civilizations and the Beinecke Rare Books and Manuscript Library.

The symposium opened with the question “Where to Locate the Occult?” — a panel dedicated to the definitional problems of marking various practices in Islamic history as magical or occult. Christian Lange (Utrecht University, the Netherlands) probed the Arabic concept sihr, meaning generally magic or enchantment, through an examination of its place in eschatological, ethical, and legal literature. Nicholas Harris (University of Pennsylvania) discussed the history of Islamic alchemy as a “mystical and symbolic form of spirituality” and its ultimate rejection in the nineteenth century as pseudo-science. Frank Griffel (Yale), who served as discussant, outlined the ontological interconnections between magic and miracle in classical Islamic theology, while Shawkat Toorawa (Yale) moderated the lively conversation that followed.

The second panel focused on the occult metaphysics of the Iranian theologian Fakhr al-Din al-Razi (d. 1209), a topic that has received relatively little scholarly attention. Michael Noble (Warburg Institute, London) introduced the concept of the universal soul, a lynchpin to Razi’s cosmology of the occult, which draws on neoplatonic currents explored earlier by such imminent thinkers as Ibn Sina (d. 1037) and al-Ghazali (d. 1111). The art historian Yael Rice (Amherst College) discussed an illuminated Persian adaptation of Razi’s book of astral magic produced in the Mughal court of India during the sixteenth century, a unique manuscript filled with talismanic images, visuals of astrological degrees, and “recipes for suffumigations to be used for the purpose of astral piety.” Yahya Michot (Hartford Seminary) presided over the panel as a discussant.

The final panel of the first day turned to rituals and spells, in both theory and practice. Elizabeth Price (Yale) explored early theological debates that sought to establish in various forms a rational basis to Islamic ritual devotional activity in the face of antinomian critiques attacking religious law as fundamentally irrational. Moving beyond these theological concerns, Emily Selove (University of Exeter) examined the rhetorical and at times rather obscene dimensions animating the spells and incantations in the Arabic grimoire of Siraj al-Din al-Sakkaki (d. 1229). As the discussant for the panel, Toorawa addressed how the category of prayer, from the devotional to the apotropaic and prophylactic, has been woefully under theorized in Islamic studies, a comment that led to a vigorous discussion about analytical categories, a theme repeated throughout the day.

The second day of the symposium began in the Beinecke Rare Books and Manuscript Library with a roundtable discussion entitled “How to Handle the Occult?” This hands-on session examined an array of occult manuscripts and devotional materials that Zadeh had curated from the rich holdings of the Beinecke collection. These included a fragmentary collection of incantations (Landberg MSS 35a); treatises by al-Būnī (d. 1225) and Ibn Turka (d. 1432), two luminaries of classical Islamic occult learning (Hartford Seminary Arabic MSS 70 and The Landberg MSS 146); and a scroll containing Quranic verses, and invocations with magical squares and talismanic figures (Arabic MSS 341). The roundtable consisted of presentations by Zadeh, Selove, Matthew Melvin-Koushki (University of South Carolina), and Noah Gardiner (University of South Carolina). Zadeh characterized the countless codicological materials that remain largely unexamined and unedited, particularly in the wide-ranging fields of the occult learning, as vital resources for addressing major lacunae in the modern historiography of Islamic thought.

The question of reception history continued into the fifth panel, which focused on the Arabic epistles by the famed Brethren of Purity (Ikhwan al-Safa’), written in tenth-century Iraq. Godefroid de Callataÿ (Université catholique de Louvain, Belgium) examined various allegorical interpretations of the Brethren’s celebrated Animal Fable in light of their larger political and metaphysical philosophy. Liana Saif (University of Oxford and Université catholique de Louvain) addressed the central role of magic as a licit sphere of learning in the Brethren’s program of religious renewal. Salimeh Maghsoudlou (Yale), the panel’s discussant, spoke to the broader problem of hierarchal stratification, in the tension running throughout the epistles between esoteric and exoteric structures of knowledge.

This was followed by a panel dedicated to courtly contexts for the production of occult learning. Noah Gardiner explored the diverse codicological recensions of Ibn Khaldun’s (d. 1406) treatment of occult learning in light of his courtly audience in Mamluk Cairo. Matthew Melvin-Koushki discussed the ontological coincidence of opposites as advanced by the occultist Ibn Turka (d. 1432), which served as a basis for imperial ideology amongst the Timurids, Ottomans, and Mughals. Anna Akasoy (CUNY Graduate School and Hunter College), who presided over the panel, addressed how a cosmology of imperial love could be put to the service of violence and hegemony.

The penultimate panel continued the theme of courtly patronage with two papers focused on the Ottoman period. Özgen Felek (Yale) explored the various occult interests of the Ottoman Sultan Murād III (d. 1595), which included astrology, astral magic, books of dream interpretations, and talismanic clothing and objects. Tuna Artun (Rutgers University) turned to divinatory material from the seventeenth century and its mobilization in the service of Ottoman politics. In his role as discussant, Ryan Brizendine (Yale) raised several notable parallels in both papers with contemporary practices in the Mughal court.

The final panel explored points of rupture and continuity in the modern period with a presentation by the anthropologist Alireza Doostdar (University of Chicago) of his fieldwork on occult learning and witchcraft in modern-day Iran. Doostdar turned to the trope of  “gullible women” as sites of moral corruption in the competing discourses of secular modernists and religious reformists. Addressing the “hegemonic forms of rationality” that have constituted particular practices as deviant and heterodox, Abbas Amanat (Yale), who served as respondent, spoke to the broader currents in modern Iranian history that have sought to regulate and reform women’s bodies. Samuel Ross (Yale) presided as chair over the stimulating conversation that ensued.

A curious feeling of wonder followed the entire symposium, from the marvelous images of mysterious manuscripts and powerful charms to the array of voices in and outside the fields of Islamic magic, led by professors from the Yale community and beyond. Further synergies catalyzed in the contributions by the many doctoral students who participated, namely Elizabeth Price, Ryan Brizendine, Samuel Ross, Nicholas Harris, and Michael Noble, along with various graduate students who traveled to attend. Through it all, a wondrous excitement persisted, as the symposium drew to a close with reflections on the state of the field and thoughts of more conversations to come.