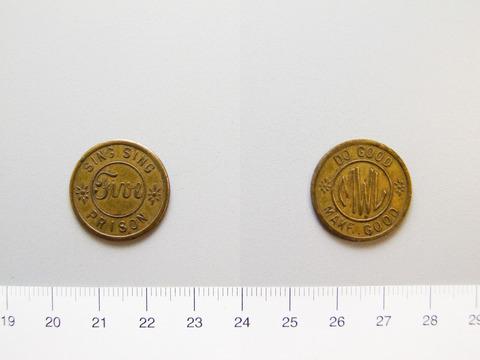 We are overjoyed to announce that the Wrexham Prize “for the best Senior essay in the field of the humanities” was awarded Monday, May 22, 2017 to Evelyn Hilbrich Davis.  Evelyn’s senior essay, “Applied Christianity: The Token Currency of the Mutual Welfare League” was advised by Prof. Sally Promey and submitted to the Departments of Religious Studies for the fulfillment of her bachelor’s degree.

In her nomination of the essay to Yale College, our Director of Undergraduate Studies, Phyllis Granoff, wrote the following.

Evelyn Hilbrich Davis’s essay, “Applied Christianity: The Token Currency of the Mutual Welfare League,” is one of the most thoroughgoing acts of scholarship to be produced by our seniors in many years. Written in lively, engaging prose, Davis reclaims a strange moment in penal history, one in which a single reformer decided to allow prisoners at one prison to develop and exchange currency. We know from the very beginning that this effort to create an economic frame for prisoner reform was ultimately a failure. Yet you read this senior essay to imagine what good such a plan might have done, had it been taken up more broadly. Prisoners who were involved in this system reported better health and better behavior. What Davis tries to teach her readers is the mixed fact of this innovation: the dangers of using economic incentives for moral behavior, but also the possibilities for the good built into such a materialist frame for human engagement.

We nominate this essay not only because it is a good story well told, but also because it is a strange, obscure tale pulled from the archives by Evelyn and situated brilliantly in the historiography. Evelyn moves between a descriptive, historical voice and a normative, ethical voice with great alacrity; even more, she possesses an unusual eye for material and sensory culture, reconstructing from the database of coins and currency a whole anthropology of the forgotten lives of prisoners. Because this essay is truly humanistic in multiple senses (literary, art historical, historical, and philosophical) we highly recommend it for the Wrexham Prize.