Home » News » In conversation: Kathryn Lofton on the 2016 elections from a humanist’s point of view

In conversation: Kathryn Lofton on the 2016 elections from a humanist’s point of view 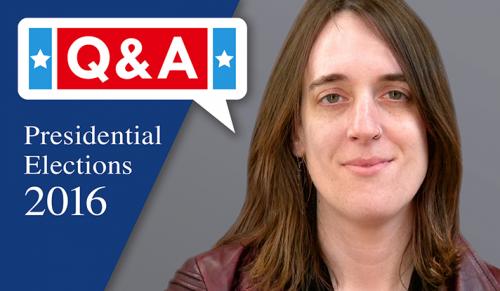 As part of an ongoing series of conversations with Yale faculty members on the 2016 presidential elections, YaleNews recently met with Kathryn Lofton, professor and chair of the Department of Religious Studies, American studies, history, and divinity.

Lofton, who was recently named the Faculty of Arts and Sciences’ deputy dean for diversity and faculty development, is the author of “Oprah: The Gospel of an Icon” and the forthcoming book, “Consuming Religion,” which will examine religion and its relationship to consumption, and feature analyses of subjects including office cubicles, binge viewing, the Kardashian family, and the Goldman Sachs Group.

The Yale scholar recently shared her thoughts on the 2016 elections — what role religion plays in it, what it will be remembered for, and how she hopes it will be a positive learning experience for her students.

The following is an edited version of that conversation.

What will the 2016 elections be remembered for?

The 2016 elections will be remembered for the outsider politics practiced by Bernie Sanders and Donald Trump. Each candidate articulates a rabid and rabble-rousing relationship to capitalism. Between them on the party dais stand a group of established alternatives. Yet the enthusiasm for Trump and Sanders is precisely about the sense that they are not the establishment, and that they each take to task politics as usual. What is so striking is how they are able to accomplish such a rhetorical hat trick — to claim outsider status — as older white men who have been deeply tied to the establishment for a very long time. Sanders may be an iconoclast, but he has also been in Congress since I was in sixth grade. Trump may be pugnacious, but you don’t get your name plastered on properties in multiple cities without powerful cronyism. Neither Trump nor Sanders has been poor, and neither has been without a significant array of professional options throughout their very long lives as public figures. They both have been able to deploy well different yet overlapping fraternities of heterosexuality and racial privilege. But their present genius is that they have each framed themselves as the most outside of outsiders despite all these benefits of their birth. I think it says a lot about the present racial and economic discomfort in America that Trump and Sanders have sold so easily a story of themselves that overshadows altogether any other storyline for this election.

What role does religion play in the presidential elections?

Scholars of religion always get a little extra air play during presidential elections because I think we use something called “religion” to hunt for deep background in political figures. “Religion” becomes a word for “the deep down,” the thing we want to imagine is there but can not quite see. “Religion” stands for: Where are you abject? Where do you concede community? What organizes your perceptions, preferences, and philosophies? This use of religion as a divining rod for intimate ideology is entertaining — What makes Trump a Presbyterian? Is Clinton really Methodist? Does Ben Carson proselytize? How much Judaism is there in Sanders’ Jewishness? — but it is not very scholarly. Most scholars of religion would be the very first to say that a lot of things we name as “religion” in public are very complicated performances with no obvious baseline referent to anything real. That both Ben Carson and Prince have (or had) a relationship to Seventh-day Adventists should inspire any thinking person to question the value of denominational discernment in the history of politics.

If we move past simple sectarian deduction, though, and start thinking about religion as a word that describes political collectivities of a certain valence, then I think Sanders and Trump are again quite interesting to engage. Look at the level of excitement that their followers have for them, see how they become sociological profiles (Trump populists and Bernie Bros) and economic profiles and gendered profiles. In this case, religion is a way of trying to talk about cohering identity. Trying to guess at whether Trump is Christian is a way of trying to guess at the goodness in his laissez-faire self-interest; thinking about Sanders’ Judaism is just a way to reiterate how thoroughgoing his socialism is. In both cases, denominated religion just offers one more hue to the political religion they manifest.

And, to be clear, this is why they have both been so successful against Beltway odds. Not because they are not religious or because they are outsiders, but because they have brilliantly figured out how to become the social frame of your dissenting agreement to them. Trump is the religion of Trump. He speaks more openly than any other candidate about disliking religion, which is evident mostly in his Islamophobia and in some of the claims that he has made about Catholicism. To Trump, religion is nothing more than groups of people organizing on behalf of ideologies that he thinks keeps them from being free market Americans. But this is what religion does: it organizes people against other things (wrongly) called religion on behalf of its claim that it is, alone, the truth.

Which of today’s presidential candidates could be considered a cultural icon?

Icons can’t be icons unless you can take their face and make a coin of it: make an imprint that can be recognizable beyond its particular moment as an idea of something transhistorical, worthy of commemorating for a value that supersedes their particular life. Trump has already sought to self-iconize in his own formations of empire. Here I think not only of his buildings but also his media interventions. There is no way to understand Trump without watching Trump-produced beauty pageants and Trump-hosted reality shows or reading Trump books. He is the impresario of competitions based on being savvy enough to out-maneuver the person in front of you through strategic falsifications of your apparent goods. Trump is capitalizing on a form of television that exists and thrives on economic insecurity. There is something about his brazen self-interest and the commodification of that self-interest that is the other side of Oprah Winfrey’s form of spiritual self-care. I think Oprah and Trump are the iconic incarnations of our present financial moment. Trump’s books are an amazing conjunction of self-help and business manual, a kind of business strategy guide to your own self-creation as him — i.e., you, too, can be Trump! By way of contrast, Oprah says that you, too, can be an icon (like her) if you figure out how to tell your story truthfully and make your power come from its insistent unequivocal retelling.

What elements of the election have you integrated into your teaching?

What is so great about any election for a scholar of religion is that elections offer the opportunity to pose the question: What is religion? It is a question that is critically important in a campaign. There is always a moment in the campaign where questions of proper respectability on the part of the candidates is raised strongly and then tied often to a concept of tradition or denomination. So where is the respectability and where is the civil society in this election? I think that is not just a social question; it is also a foundationally religious question about how we think our leaders ought to represent some idea of social community. We see in the two most popular meme-making candidates a real disinterest in maintaining respectability at a time of very high professionalization and bureaucratization. When we look at the steadiness of Barack Obama and the kind of undifferentiated steeliness of Hillary Clinton, I think many people see their boss: They see corporate actors who are assembled and polite and correct in ways overly ceding the economic givens. I think there is something about both Sanders and Trump that allows an inner Id to rise up. It is a sort of ritual articulation of the idea: “Can I just be against everything that organizes my daily repression?”

As a teacher, I am very interested in how the questions of gender and political leadership are going to play out here, especially in terms of how we seem to tolerate wild behavior and inconstancy more from masculine voices than for female voices, more from ostensibly white speakers than legibly nonwhite ones.

Why is it important for students to study the humanities?

Humanists work on interpretation. In the classroom, we try to teach students how to become disciplined and supple interpreters. To be clear, the rewards of discipline are not so apparent. We live in a social media moment of hyperactive first-person blather. The cause of reason, clarity, and subtlety is always hard to argue — any student of the 18th-century would say it was in as much short supply then as now. But technology wires first-person randomness to the vast interconnected public sphere. And so the metric of success becomes the ability to be an assembly line of clickbait: to remain ever and always distracting in your singular redundant-yet-addictively-clickable complaint. In such a time, being a humanist is pretty uncool. We are all about the slow-down speech, the fact check, the grammar check, the hesitancy about words and their multiple meanings and material consequences. We want sentences to change upon revision. We want thinking to change. We want our words to improve upon what came before, not merely find synonyms for the familiar. A student recently asked me if he could use the first person in their next paper. I said, “Of course!” The entire point is to learn how you can use the first person in a way that makes society imagine itself in your voice rather than imagining that you are simply the best barker to take charge of the rhetorical disarray. The first person is a powerful tool. Like all tools of power it should be used sparingly and with as much precision as possible.

I think the purpose of a humanities classroom anywhere is always to develop critical interpretive capacity. Once a student has learned the art of substantive criticism, we have done our job. To be clear, this is not the same as self-criticism — I think our students enter Yale with incredible, even disabling, capacities for self-criticism. What we need are critics, which is to say people willing to wager a reply that includes the naming of an alternative through the wreckage of the critique. And that is where I think all the presidential candidates are riveting. They are all people who have wagered an alternative (however rhetorical) and made something — whether it is a tower, a movement, or themselves — out there, as your proposed next president. Those are different registers of innovation, and I want my students to feel as if they can be a part of thinking of the world as something that has not yet been fully made, but is inviting their reauthorization, their rebuttal, and their revisions.