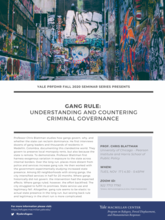 Gangs rule millions worldwide. Professor Chris Blattman studies how gangs govern, why, and whether the state can reclaim dominance. He first interviews dozens of gang leaders and thousands of residents in Medellin, Colombia, documenting this clandestine world. They govern to preserve local monopoly rents, but also because the state is remote. To demonstrate, Professor Blattman first harness exogenous variation in exposure to the state across internal borders. Over the long run, places more distant from police and services increase gang rule. He then worked with the government experimentally study increased state presence. Among 80 neighborhoods with strong gangs, the city intensified services in half for 20 months. Where gangs historically did not govern, the intervention had the expected effects. Where gangs ruled, however, the effort backfired. The city struggled to fulfill its promises. State service use and legitimacy fell. Altogether, gang rule seems to be elastic to actual state presence in the long run, but seizing back rule and legitimacy in the short run is more complicated.
Chris Blattman is the Ramalee E. Pearson Professor of Global Conflict Studies at the University of Chicago’s Pearson Institute and Harris Public Policy. His research focuses on why some people and societies are poor, unequal and violent, and how to tackle these issues. Some of his ongoing work investigates:

• How are street gangs and other criminal groups organized in Colombia? Working with the government and civil society, Blattman tests ways to reduce the power of gangs to govern and extort civilians.
• What causes street violence and shootings in cities ranging from Chicago to Monrovia? Can we predict what young men are likely to be violent and help them avoid this path? Blattman is studying how employment and cognitive behavior therapy programs can reduce killings.
• Why do hostile groups hold onto false beliefs about one another? From India to America, what are the psychological drivers of persistent prejudice?