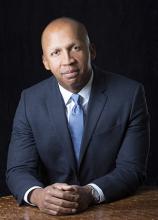 Update: This event will not be Livestreamed or recorded at the request of the speaker.

Bryan Stevenson, a public interest lawyer widely acclaimed for his work on behalf of the poor, the incarcerated, and the condemned, will deliver the annual Parks-King Lecture at YDS on Wednesday, February 1. The lecture will take place at 5:30 p.m. in Niebuhr Hall, with a reception to follow.

Bryan Stevenson is the founder and Executive Director of the Equal Justice Initiative. Under his leadership, EJI has won major legal challenges eliminating excessive and unfair sentencing, exonerating innocent death row prisoners, confronting abuse of the incarcerated and the mentally ill, and aiding children prosecuted as adults. EJI recently won an historic ruling in the U.S. Supreme Court holding that mandatory life-without-parole sentences for all children 17 or younger are unconstitutional.

Stevenson’s work fighting poverty and challenging racial discrimination in the criminal justice system has won him numerous awards. He is a graduate of the Harvard Law School and the Harvard School of Government, and has been awarded 26 honorary doctorate degrees. He is the author of award-winning and “New York Times” bestselling “Just Mercy”. In 2015, he was named to the Time 100 recognizing the world’s most influential people. Recently, he was named in “Fortune’s” 2016 World’s Greatest Leaders list.

For more on Bryan Stevenson and his work, see: http://eji.org/bryan-stevenson.
Established in 1983 in honor of Rosa Parks and Martin Luther King, Jr., the Parks-King Lecture is dedicated to bringing the contributions of African American scholars, social theorists, pastors, and social activists to YDS and the wider New Haven community.