Home » News » At Yale, an emphasis on pluralism

At Yale, an emphasis on pluralism 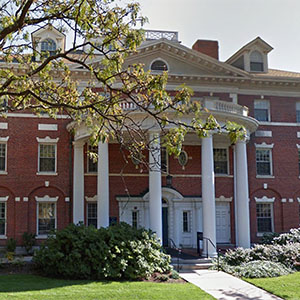 In the religious spaces at Yale and beyond, murmurs about society’s increasing secularization find their way into the public dialogue. At Yale, though, the trend is toward religious pluralism and dynamic conversations about belief.

Nationally, a growing number of “nones,” or people who do not identify with a specific religious group, have led some to speculate that society is becoming increasingly secular. A Pew Research Center study released in 2014 shows lack of religious affiliation on the rise, with nearly 23 percent of American adults identifying as atheists, agnostics or “nothing in particular,” a six point increase since 2007.

At Yale, the statistics reflect even higher percentages. According to a survey distributed by the News in August, nearly 44 percent of incoming freshmen identify outside traditional religious affiliations — such as Christian, Muslim or Jewish — including “agnostic” and “more than one.”

But leaders in Yale’s religious spaces suggest that this rise of “nones” on campus in fact shows a trend toward even more robust religious conversations. Now demographic changes and liberty to express religion in complex ways make the religious landscape at Yale more nuanced than in decades past.

“The University has not become a significantly more secular institution,” said Miroslav Volf, the founder and director of the Yale Center for Faith and Culture, which is based at the Yale Divinity School. “My sense is [that] universities … that understand themselves as secular, for a while, have in fact been pluralistic cultural spaces, both among the professors and among students. You have people embracing wide varieties of positions — many different religious positions, as well as secularism. My preference is to speak about Yale and universities more broadly as pluralistic rather than secular.”

Kathryn Lofton, the University’s Religious Studies Department chair, said concerns about secularization are not new to Yale’s campus, or even to society overall. She made reference to William F. Buckley Jr.’s ’50  1951 book “God and Man at Yale,” which criticized apparent efforts toward secularization at the University in the 1940s and early ’50s. It’s possible, Lofton said, that worry about increasing secularization is really worry about decreasing Christianity, though she said she is “not convinced” that there’s less belief in God at Yale over time. Instead, people may simply be articulating their religious views differently, especially those who are “spiritual but not religious.”

Qadry Harris DIV ’18 said that the line between sacred and secular has become increasingly blurry in society at large. People — especially millennials, who are statistically less religiously affiliated than previous generations — will not privatize their nontraditional religious beliefs, and anti-institutionalism attitude means young people are not easily organized into pre-existing religious spaces, he said.

Ian Oliver, the senior associate chaplain for Protestant life, phrased this transition as moving from the “tick box” to the “paragraph,” allowing for more complex notions of religious practice. Increasingly, students arrive at Yale from families that may practice two or three faiths, and may be unsure of, or even unexposed, to religious culture.

“It’s not that people are less religious, it’s that there are so many different pieces of their identity, some of which are classically religious, some spiritual, or they may simply not be atheists,” Oliver said. “The number of atheists is rising, yes, but the big growth is in the ‘nones.’ Every time someone tries to organize them into a set of beliefs or characterize them … that is completely not who they are. They are by definition unorganizable.”

Those interviewed praised Yale’s ability to engage with a diverse array of religious identities. Charmain Yun ’95, co-director of Yale Students for Christ, said that she has seen a broadening of religious resources and visibility since she graduated in the mid-1990s, when religious life felt “in the margins.”

Indeed, since Sharon Kugler became the University chaplain in 2007, Kugler said she has seen across-the-board expansion of religious programming, including the introduction of a full-time director of Hindu life. Kugler, along with Oliver and Yun, reiterated the necessity of having a spiritual space where students can seek reflection and ask questions, regardless of their affiliation. For many, arrival at Yale is the first time they’re exposed to and able to ask questions about religion, Oliver said.

Furthermore, Yale can itself act as a mode of religion, Lofton said. While spirituality often engages individual ideas, religion engages a social space and community, she said. While Yale students are spiritual in their self-commitment, they are religious in their devotion to the University, which comes with its own set of rules, traditions and expectations.

“Yale is getting more powerful than other forces in individuals’ lives,” Lofton said. “This is a much more diverse place, and we have called on a greater diversity of people to commit to this place called Yale.”

Still, the “great religious traditions” are not disappearing anytime soon, Volf said. Indeed, they still provide important frameworks for discussions of a meaningful life, even as society becomes more pluralistic, he added. As Yale and society overall move toward more open conversations about religious identity, and toward a more diverse population of different faiths, Volf said his hope is for engaged conversations about truth and meaning.

“We should think about ways in which we can fruitfully manage our pluralism,” Volf said. “By fruitfully manage, I mean in which we can be engaged in truth-seeking conversation about what matters to us as humans most. And I think that would be a well-managed pluralism where we all are free, with our dignity preserved, to engage in this truth-seeking conversation about what makes for human fullness.”