“Why We Must (Not) Call US Border Camps ‘Concentration Camps’ ” 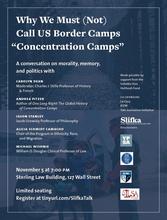 You are invited to a special evening exploring the point where Jewish memory and contemporary American politics are most intertwined: the debate over calling US border camps ‘concentration camps.’

Beyond the headlines and attention-grabbing tweets - what is at stake in linking US border camps to concentration camps, or in rejecting that link? How would our politics and the meanings of memory change based accepting or rejecting this connection? In other words – this evening won’t aim to answer ‘yes’ or ‘no’ to the question of whether the US is operating concentration camps, but to figure out how and why that question matters so much. Why is it worth arguing about in the first place – and, when we argue, what are we really arguing about?

Anchoring the evening is Andrea Pitzer, author of One Long Night: The Global History of Concentration Camps - and in dialogue with her we have an amazing panel of professors from across Yale: Carolyn Dean, who studies Holocaust memory; Jason Stanley, author of How Fascism Works; Alicia Schmidt Camacho, head of the Program on Ethnicity, Race, & Migration; and Michael Wishnie, who directs Yale Law School’s immigration clinic.

This isn’t just a Jewish issue – it touches on the experience of Latinx communities in the present, and the memories of the Japanese-American community’s memories of internment during World War II. As such, we are proud to be partnering with La Casa Cultural: The Latino Cultural Center at Yale, the Asian American Cultural Center at Yale, the Yale Center for the Study of Race, Indigeneity & Transnational Migration, the Yale Program for the Study of Antisemitism, the Yale Journalism Initiative, the Latino Law Students Association at Yale, and the Jewish Law Students Association at Yale. We are especially grateful to the support of the Sobotka Yom HaShoah Fund for making this evening possible.

Tickets are free but space is limited. To reserve a spot, visit tinyurl.com/slifkatalk.

We are looking into live-streaming for those who cannot make it to New Haven.

This is the first program of Slifka Center’s new Elihu Initiative, which aims to create new ideas at the intersection of the Jewish and American intellectual traditions.